Today, I’ll post the third installment of Scott Kim’s blog on transforming mathematics education.  But before jumping into that, I want to share a little about Bridges 2018, which just took place in Stockholm, Sweden.  Because of my move and career shift, I decided not to go — at the time I would’ve needed to make travel arrangements, I didn’t even know whether I’d be living on the West coast or the East coast when I’d need to catch my flight!

In any case, my Twitter feed has been buzzing recently with tweets from Stockholm, and some have featured participants in the Bay Area Mathematics Artists Seminars.  Monica Munoz-Torres tweeted about Frank Farris’s talk on vibrating wallpaper patterns, which you may recall he gave at our March meeting of the BAMAS at Santa Clara University.

And the Bridges Program Committee announced that Roger Antonsen won Best in Show for 2-dimensional Artwork for his piece, “Six Perfect In-Shuffles With 125 Cards and Five Piles.”

And it’s not just that.  Even if curriculum could be reimagined at a pace to keep up with technology, teachers would need to be retrained to use the new curriculum with the new technology.  Not just retrained on the job, but while students at university — meaning that institutions of higher education would need to have their faculty keep up as well.  This means resources of time and money, and the willingness and ability of mathematics and education faculty, as well as school districts, to embrace change.  A tall order, to say the least.

I could go on at length about this topic, but let’s give Scott a chance.  Again, if you just can’t wait for the fourth installment, feel free to go to Scott’s blog, where you see the post in its entirety.

Level 3. The wrong MATH (sailing in the wrong direction)

The mathematics we teach in school is embarrassingly out of date. The geometry we teach is still closely based on Euclid’s Elements, which is over 2000 years old. We continue to teach calculus even though in practice calculus problems are solved by computer programs. Don’t get me wrong: geometry and calculus are wonderful subjects, and it is important to understand the principles of both. But we need to re-evaluate what is important to teach in light of today’s priorities and technologies.

Here are three ways to update what we teach as mathematics.

3a. Re-evaluate topics. The Common Core State Standards take small but important steps toward rebalancing what topics are taught in math. Gone are arcane topics like factoring polynomials. Instead, real world mathematics like data collection and statistics are given more attention. As Arthur Benjamin argues in a brief TED talk, statistics is more important than calculus as a practical skill.

Solution: give kids an overview of mathematical topics and what they are for, long before they have to study them formally.

3b. Teach process. The widely used Writer’s Workshop program teaches the full process of writing to students as young as kindergarten. The process accurately mirrors what real writers do, including searching for a topic, and revising a story based on critique. We need a similar program for the process of doing mathematics. The full process of doing math starts with asking questions. Math teacher Dan Meyer argues passionately in his TED talk that we do students a terrible disservice when we hand them problems with ready-made templates for solution procedures, instead of letting them wrestle with the questions themselves. Here is my diagram for the four steps of doing math. Conrad Wolfram created a similar diagram for his Computer-Based Math initiative.

Solution: give kids an explicit process model for problem solving. 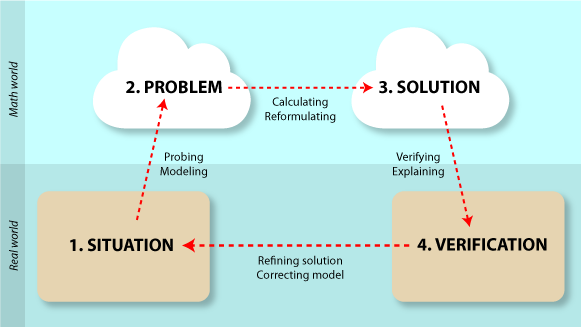 3c. Use computers. In an era where everyone has access 24/7 to digital devices, it is insane to teach math as if those devices didn’t exist. In his TED talk, Conrad Wolfram points out that traditional math teachers spends most of their time teaching calculating by hand — the one thing that computers do really well. By letting students use mathematical power tools like Mathematica and Wolfram Alpha, teachers can spend more time teaching kids how to ask good questions, build mathematical models, verify their answers, and debug their analysis — the real work of doing mathematics. And students can work on interesting real-world problems, like analyzing trends in census data, that are impractical to tackle by hand.

Solution: build and use better computer tools for doing math. Revamp the curriculum to assume the presence of such tools. Emphasize solving interesting problems, de-emphasize or delay learning about the mathematical mechanics for carrying out the computations. In other words, teach mechanics on a need-to-know basis.

Next week will feature the Level 4 of Scott’s remarks.  Until then!