This week, I write from Jagodina, Serbia! I am here with my friend Dr. Snezana Lawrence (author of www.mathisgoodforyou.com and Mathematicians and Their Gods) presenting at a History of Mathematics in Mathematics Education conference at the University of Kragujevac.  Snezana secured funding for and helped organize this conference, which is intended to provide teachers and teacher educators resources for making mathematics more accessible to students by providing contexts for various mathematical ideas.

As mathematicians are well aware, mathematics is both a historical and cultural phenomenon.  I know relatively little about the history of mathematics, but I did do some research into the relationship between Kepler and Tycho in preparation for a talk on Kepler’s Laws and the Music of the Spheres.  The facts that Tycho was not only interested in astronomy, but was also a member of the Danish nobility (and hence had the money to design and create instruments which allowed for more accurate measurements than previously possible) were crucial in providing the data necessary for Kepler to deduce the laws which we know by his name today.  The story is of course much more involved; the point is that providing some context for statements such as Kepler’s Laws makes them more accessible to students rather than just stating them as if they were abstractions devoid of cultural and historical context.

My contribution was running a workshop on polyhedra (the Platonic solids in particular).  Participants were familiar with the Platonic solids at various levels, so I made sure there were nets available at varying levels of difficulty.  For example, we were going to discuss the geometry of fullerene molecules, so I also had some truncated icosahedron nets printed out as well.

The weather was particularly warm this weekend; plans were altered so we could be outside for much of the workshop.  So I moved everything I wanted to discuss using the computer to the first hour.  For example, to put our work into some context, I discussed my correspondence with Magnus Wenninger (which I excerpted in a series of blog posts earlier this year).

I also wanted to make a reference to Kepler’s Harmonices Mundi, as Snezana had mentioned Kepler earlier in the conference.  Among many other things, Kepler included a discussion of the Platonic solids. 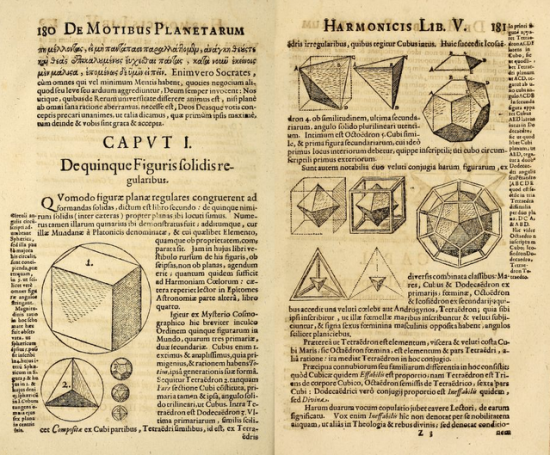 Further, I wanted to discuss the fairly recent (certainly compared to Kepler) discovery of fullerenes, as this discovery led to an interesting, if relatively simple, result:  in a fullerene molecule, where each carbon is adjacent to exactly three others, and the carbon atoms come only in rings of five and six, then there must be exactly twelve rings of five carbons, regardless of how many rings of six there are.

This is actually not very difficult to prove using Euler’s formula (and I have done so in a previous post), but it is somewhat surprising the first time you hear it.  More difficult is to prove that there can be any number of hexagons except one; I didn’t go into this in any more detail, however.  But I did want to go to the Wikipedia article and put the question in some historical context.

After the lunch break, we proceeded to an outdoor classroom which we populated with two movable whiteboards.  First, I had participants build at least one of the Platonic solids using the double-tab method I learned from Magnus Wenninger.  We then moved on to an algebraic enumeration of the Platonic solids as an application of Euler’s formula (which was also mentioned earlier).  As some of the participants were involved with teaching younger students, I wanted to avoid spherical trigonometry.

Then, as mentioned above, we looked at fullerenes.  Since the technique involved here was similar to that used to enumerate the Platonic solids, after we defined the problem, I gave the participants time to solve it on their own.  Relatively quickly, one of the educators did prove that there were exactly twelve rings of pentagons, and presented her solution to the others.  This was a great way to end the afternoon; afterwards, we took a walking tour of the busier section of Jagodina.

Of course one interesting aspect of attending any international conference is learning about the similarities and differences between education in different countries.  In Serbia as well as the United States, teachers are not paid as well as other professions.  But mathematicians have fewer opportunities for employment than they do in the US, so they are more likely to go into teaching as a career.

One striking difference revolves around school subjects and the corresponding teacher training.  As early as fifth grade, the sciences are separated as subjects.  All students take biology and informatics (computer science) beginning in the fifth grade, physics beginning in the sixth grade, and chemistry beginning in the seventh grade.  Moreover, teachers of mathematics, biology, physics, and chemistry have to major in that subject to teach in grade five and beyond.  (Up to the fourth grade, there is just one teacher for all subjects except foreign languages.)

Another significant difference is how mathematics is taught at university.  Each major in the sciences has their own sequence of mathematics courses, taught by faculty in that department; physics typically has a three-semester sequence, and chemistry a two-semester sequence.  So there is no “one size fits all” calculus sequence, as is commonplace in American universities.

One consequence of this is that there is no gateway proof-writing course in the mathematics major.  Theory and proof are integrated into mathematics courses from the very beginning.  Thus, to earn the highest marks in an introductory calculus course, a student must show an ability to think abstractly and write mathematical arguments.  This would seem like such a luxury for the typical American mathematics professor – a Calculus I course consisting entirely of math majors!  But this is just standard operating procedure in universities in Serbia.

So my first experience in Serbia was an enjoyable one, and I learned a lot about the culture and education.  I look forward to a few days in Belgrade before returning to the US later on in the week.  I leave you with this interesting piece of found art I saw walking down the main street of Jagodina — you truly can never tell what surprises await when visiting somewhere new!