Yesterday was the second meeting of the Bay Area Mathematical Artists!  We had a somewhat different group — some who came last time were unable to make it, but there were some new faces among the enthusiasts as well.  Fourteen showed up for the afternoon, and two others joined us for dinner afterwards.

After the last meeting, I received a few emails offering suggestions about different ways to organize the gatherings.  One suggestion was to have a social period for the first part of the meeting, where participants could meet those they didn’t already know, or perhaps bring artistic items for show-and-tell.

This seemed like a good idea, since in addition to letting participants get to know each other or just catch up on the previous month, it gave them a 30-minute buffer to arrive on campus.  It turns out this part of the afternoon went very well, with just about everyone arriving by 3:30.  Dan Bach was giving away old copies of mathematics journals he had collected over the years, while Colin Liotta was giving away laser-etched wooden pendants.

The only scheduled talk of the afternoon was given by Roger Antonsen, entitled Mathematical explorations and visualizations. 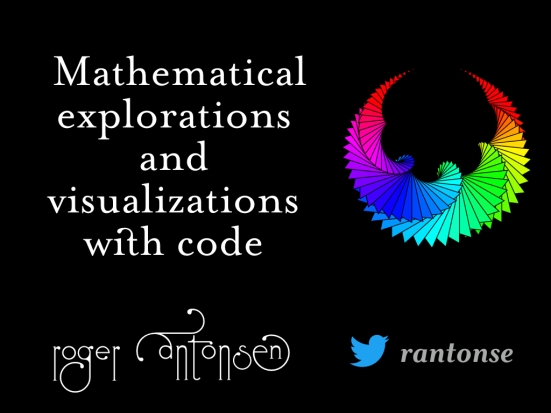 Roger talked about several of his extensive library of Processing animations. He takes his inspiration from many different places – but his Processing mantra is sometimes “make it move.” He takes an image which fascinates him, recreates it as best as he can, and then varies different parameters to make the image move.

Some of his most intriguing examples involved optical illusions, and are based on the work of Pinna; see his web page on Art to see some examples.

He also emphasized the need to create balance in his work – when you parameterize features of an image, you need to decide the range the parameter takes. Too much motion, and the animation looks too distorted, but too little, and the animation is too static. Of course the need to create balance in artwork is not restricted to creating animations, but it is constantly in Roger’s mind as he creates.

After Roger’s talk, we moved on to a discussion about the nature of mathematical and digital art.  There are other similar terms in use, such as algorithmic art and generative art.  Typically, generative art is described as art generated by some autonomous system.  This means that algorithmic art — that is, art created by use of a computer program — is a subset of generative art.  But what do all these terms mean to us, individually, as artists?

I had originally thought to break into smaller groups at first, but the group wanted to have just one, larger discussion.

There were many and varied opinions expressed — from commentary about the art community as a whole, to those who thought the question “What is mathematical art?” is nonsensical to ask because there is really no answer, and it doesn’t impact the creative process at all.

Two points I made relate to my teaching Mathematics and Digital Art.  First, every time you settle on the value for a parameter in some work you’re doing, you are making an aesthetic choice.  You can tweak all you like, but then all of a sudden you just say to yourself, “OK, that’s it!”  Of course there are times you just stop because you can’t find precisely what you want and just need to move on, but I think you get the gist of what I’m saying.  You’re making artistic choices all the time.

And second, I have students write short narratives about their work, describing the parameter choices they make.  I want to them to think about when a digital image becomes a piece of digital art.  Of course (as alluded to above) there really is no definitive answer to this question, but for students just beginning to dive into the world of digital and mathematical art, it is a useful question to consider.

This took us right to our designated ending time, 5:00.  One of the participants suggested a Thai place nearby, and so eleven of us made the short trek just north of campus.  It was actually quite good, according to all accounts.  And as I mentioned earlier, two participants who couldn’t make it earlier in the day joined us at the restaurant.  The discussions were lively, covering a broad range of mathematics, art, and other topics as well.

So again, a good time was had by all!  To round out today’s post, I’d like to say a few words about the new Digital Art Club I’m advising at the University of San Francisco.  It seems each week, one or two more students become interested, mostly by word of mouth.  There are new faces all the time!

It turns out this is a great opportunity for mathematics or science majors to learn about digital art.  The Mathematics and Digital Art course I’m teaching is not at a high enough level to count towards a mathematics major, and many students in the sciences (like computer science or physics) have required mathematics courses, also at a higher level.

We’re focusing on learning Processing at the moment, since not only are students very interested in learning the software, but I have written quite a bit about Processing on my blog.  So I can easily get students started by pointing them to an appropriate post.

Not only that, we’ve got a few students willing to take leadership positions and secure status as an officially recognized student club.  This means there are funds available for field trips and other activities.  We’re hoping to make a trip to the Pace Gallery in Palo Alto.  I’ll occasionally update on our progress in future posts.  Stay tuned!