This week, I’ll continue with some more problems from the contests for the 2014 conference of the International Group for Mathematical Creativity and Giftedness.  We’ll look at problems from the Intermediate Contest today.  Recall that the first three problems on all contests were the same; you can find them here.

The first problem I’ll share is a “ball and urn” problem.  These are a staple of mathematical contests everywhere.

You have 20 identical red balls and 14 identical green balls. You wish to put them into two baskets — one brown basket, and one yellow basket. In how many different ways can you do this if the number of green balls in either basket is less than the number of red balls?

Another popular puzzle idea is to write a problem or two which involve the year of the contest — in this case, 2014.

A positive integer is said to be fortunate if it is either divisible by 14, or contains the two adjacent digits “14” (in that order). How many fortunate integers n are there between 1 and 2014, inclusive?

The other two problems from the contest I’ll share with you today are from other contests shared with me by my colleagues.

I very much like this last problem.  It’s one of those problems that when you first look at it, it seems totally impossible — how could you consider all multiples of 23?  Nonetheless, there is a way to look at it and find the correct solution.  Can you find it?

You can read more to see the solutions to these puzzles.  Enjoy!

First we’ll look at the solution to the ball and urn problem.  Since the number of green balls is less than the red in any one basket, we know that every red ball has a green partner, so we consider the 14 pairs of red/green balls along with the six remaining red balls.

Thus, there are 15 x 5 = 75 ways to put the balls in the baskets to fulfill the conditions of the problem.

The perimeter of the shaded rectangle is 68.  To see this, we label various segments in the figure as follows: 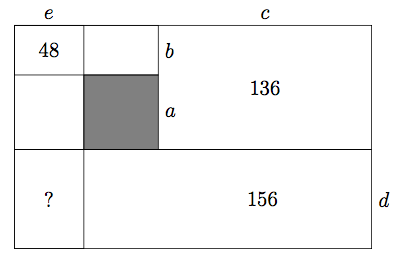 I hope you enjoyed this set of puzzles.  Stay tuned for the next installment of The Puzzle Archives for more problem-solving fun!

One thought on “The Puzzle Archives, II”