I recently needed to make a short demo lecture, and I thought I’d share it with you.  I’m sure I’m not the first one to notice this, but I hadn’t seen it before and I thought it was an interesting way to look at the behavior of polynomials where they cross the x-axis.

The idea is to give a geometrical meaning to an algebraic procedure:  factoring polynomials.  What is the geometry of the different factors of a polynomial?

Let’s look at an example in some detail: 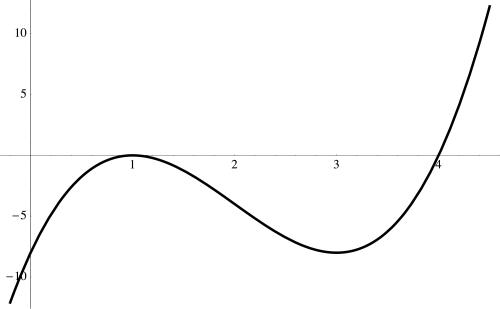 Now let’s start looking at the behavior near the roots of this polynomial. 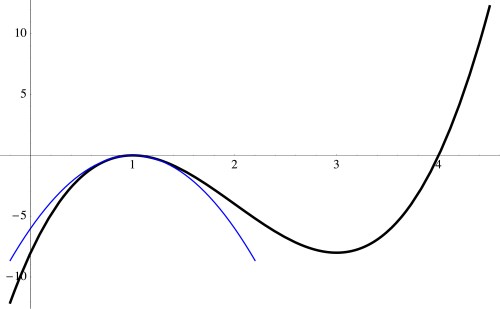 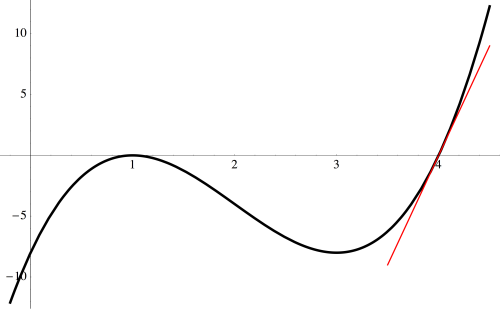 But which parabola, and which line?  It’s actually pretty easy to figure out.  Here is an annotated slide which illustrates the idea. 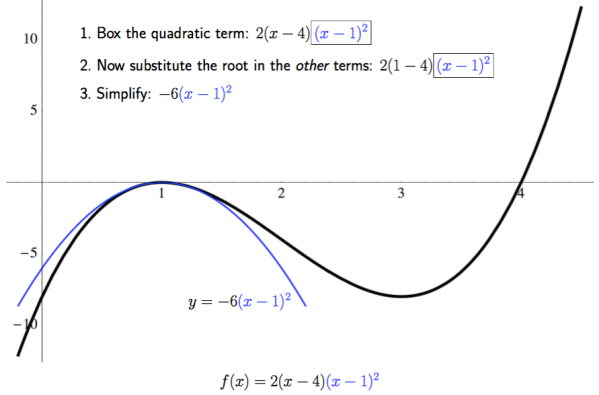 and substitute the root,

in the remaining terms of the polynomial, then simplify.  In this example, we see that the cubic behaves like the parabola

Note the scales on the axes; if they were the same, the parabola would have appeared much narrower.

We perform a similar calculation at the root 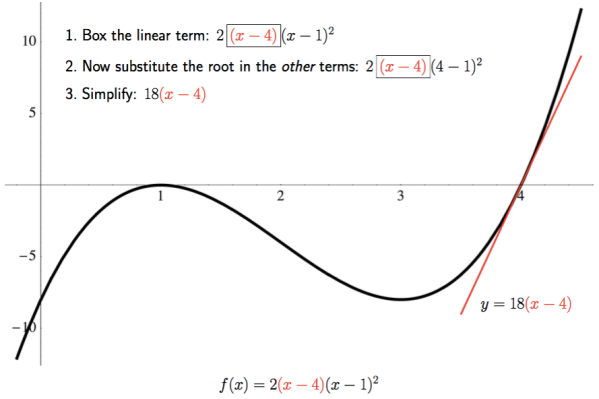 in the remaining terms of the polynomial, and then simplify.  Thus, the line

best describes the behavior of the graph of the polynomial as it passes through the x-axis.  Again, note the scale on the axes.

We can actually use this idea to help us sketch graphs of polynomials when they’re in factored form.  Consider the polynomial

Begin by sketching the three approximations near the roots of the polynomial.  This slide also shows the calculation for the cubic approximation. 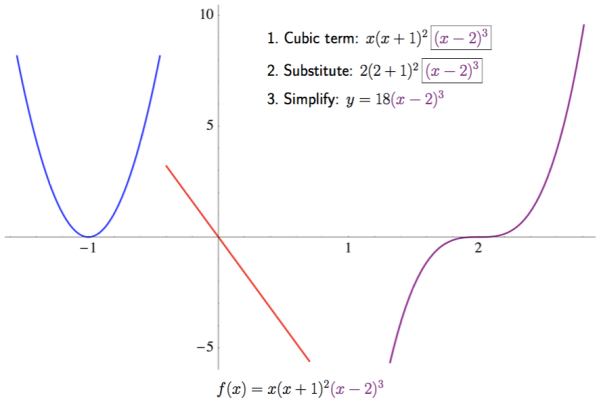 Now you can begin sketching the graph, starting from the left, being careful to closely follow the parabola as you bounce off the x-axis at 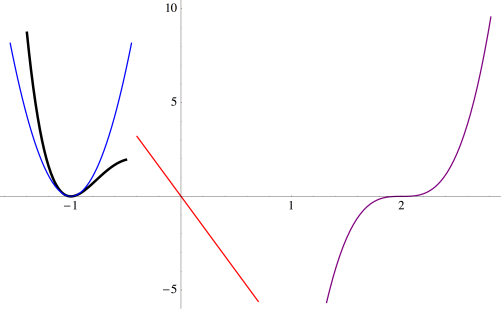 Of course you’d need to plot a few points to know just where to start and end; this just shows how you would use the approximations near the roots to help you sketch a graph of a polynomial. 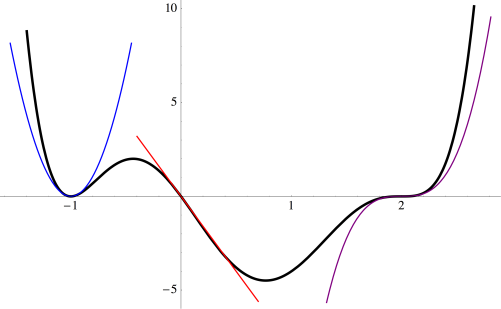 Why does this work?  It is not difficult to see, but here we need a little calculus.  Let’s look, in general, at the behavior of

Given what we’ve just been observing, we’d guess that the best approximation near

Just what does “best approximation” mean?  One way to think about approximating, calculuswise, is matching derivatives — just think of Maclaurin or Taylor series.  My claim is that the first

First, observe that the first

derivatives of both of these functions at

must be 0.  This is because

will always be a factor — since at most

derivatives are taken, there is no way for the

But what happens when the

th derivative is taken?  Clearly, the

Thinking about the product rule in general, we see that the form of the

th derivative must be

When a derivative of

is taken, that means one factor of

So when we take

th derivatives match as well.  And since the first

match, we see that

th degree approximation near the root

Those who have been reading my blog for a while will be unsurprised at my geometrical approach to algebra (or my geometrical approach to anything, for that matter).  Of course a lot of algebra was invented just to describe geometry — take the Cartesian coordinate plane, for instance.  So it’s time for algebra to reclaim its geometrical heritage.  I shall continue to be part of this important endeavor, for however long it takes….

5 thoughts on “The Geometry of Polynomials”