The original post on The Geometry of Polynomials generated rather more interest that usual.  One reader, William Meisel, commented that he wondered if something similar worked for curves like the Folium of Descartes, given by the equation

I replied that yes, I had success, and what I found out would make a nice follow-up post rather than just a reply to his comment.  So let’s go!

Just a brief refresher:  if, for example, we wanted to describe the behavior of

where it crosses the x-axis at

we simply retain the

term and substitute the root

as the best-fitting parabola at

Now consider another way to think about this:

For examples like the polynomial above, this limit is always trivial, and is essentially a simple substitution.

What happens when we try to evaluate a similar limit with the Folium of Descartes?  It seems that a good approximation to this curve at

as a function of

To see this, we need to find

After a little trial and error, I found it was simplest to use the substitution

Now it is easy to see that as

giving us a good quadratic approximation at the origin.

Success!  So I thought I’d try some more examples, and see how they worked out.  I first just changed the exponent of

looking at the curve

What would be a best approximation near the origin?  You can almost eyeball a fifth-degree approximation here, but let’s assume we don’t know the appropriate power and make the substitution

yet to be determined. This results in

Now observe that when

Thus, in our case with 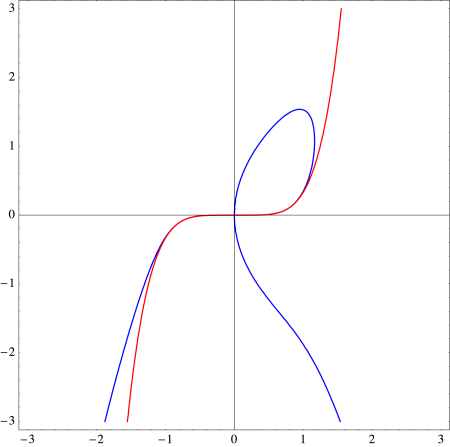 OK, I thought to myself, maybe I just got lucky.  Maybe introduce a change which will really alter the nature of the curve, such as

whose graph is shown below.

Here, the curve passes through the x-axis at

with what appears to be a linear pass-through.  This suggests, given our previous work, the substitution

We don’t have much luck with

here.  But if we move the

to the other side and factor, we get

Nice!  Just divide through by

Now a simple calculation reveals that

And sure enough, the line

Then I decided to change the exponent again by considering

Here is the graph of the curve when

It seems we have two roots this time, with linear pass-throughs.  Let’s try the same idea again, making the substitution

over, factoring, and dividing through by

It is not difficult to calculate that

is even, since there is always a root at

in this case.  Here, we make the substitution

over, and divide by

is a factor of

in this equation gives

as well!  This is a curious coincidence, for which I have no nice geometrical explanation.  The case when

This is where I stopped — but I was truly surprised that everything I tried actually worked.  I did a cursory online search for Taylor series of implicitly defined functions, but this seems to be much less popular than series for

Anyone more familiar with this topic care to chime in?  I really enjoyed this brief exploration, and I’m grateful that William Meisel asked his question about the Folium of Descartes.  These are certainly instances of a larger phenomenon, but I feel the statement and proof of any theorem will be somewhat more complicated than the analogous results for explicitly defined functions.

3 thoughts on “Calculus: The Geometry of Polynomials, II”