Geoffrey was one of the two most influential artists who guided me along the path of creating digital art.  We worked at the same school a few years ago, and I sat in on many of his art classes.  Since the faculty often ate lunch together, we’d sit and have many casual chats about art and color.

What I always appreciate about Geoffery is that even though he’s not a mathematician, he is still able to understand and appreciate the mathematical aspects of what I create.  He isn’t intimidated by the mathematics, and I’m not intimidiated by his artisitic expertise.  He really helps me develop as an artist.

Geoffrey is passionate about the use of color, and thinks and writes extensively about the subject.  I’m also fascinated by color, so I thought I’d invite him to be a guest on my blog.  He had so many great things to say, though, that is soon became too much to say in one post.

So enjoy these few weeks, and learn something more about color!  If you like what you see and read, visit Geoffrey’s website at www.geoffreyowenmiller.com.  Enough from me — we’ll let Geoffrey speak for himself….

Back in 2011, I started a series of watercolors that came to be called the Disciplines of Geography. I had just been in Europe and had spent a lot of time visiting the museums and thinking about history while walking amongst all those giant oil paintings. On my return, I was asked by a friend and talented poet to help create a cover for a book of her poems. I had been using the medium of watercolor to sketch during my travels and I decided to use it to make something more substantial and sustained. I found watercolor quite difficult compared to oil paint as every mark you make on the paper remains at some level visible. It forces you to accept mistakes while you do all you can to try and minimize them. But mostly I loved the color the transparent washes of color could create despite my perpetual uncertainty and constant mistakes.

I determined to make my own version of a history painting with watercolor by focusing on the process of painting. I started thinking about how time and space were linked with the history of the European borders. To watch the ebb and flow of the borders of different countries and governments overlapping and being overlapped was similar to the way watercolor extends out from a pour of paint on wet paper. Each layer of color is effectively redrawing the boundaries, while simultaneously building a history where every subsequent state is influenced by the previous colors, values, and borders of those before them.

As these paintings are nonobjective abstractions, meaning I was not looking at anything specific to inform my color choices, I needed something to inform my decision making. Often abstractions come from found or referenced materials, like photos, or found objects, which can often help direct the choices of value, color, line, etc., that one is making. Why choose one blue instead of another? At some level we choose colors we like or look better to us, but I like working in or creating systems that push me outside of what I normally feel comfortable with. As these paintings existed in the realm of ideas and needed a similar structure to build upon, I really started looking into the color wheel as a tool to think about the relationships of the different colors. (This itself became a multi-year ongoing project.) Without going down that path too far, I wanted to share something I found interesting and helpful in the context of making these watercolors as well providing a greater understanding to how color relates in other contexts.

As a student I was shown, in conjunction with the color wheel, certain color relationships that were supposed to help us make harmonious color choices in our images. We were supposed to make color choices based off of the relationships of the colors’ locations on the color circle. Complementary colors were any two colors on opposite sides of the circle, split complements exchanged one of those two colors for the two colors on either side of it, triadic colors were three colors equally distanced from each other, and so on. But was yellow the complement of purple?  Or of blue?  Because artists use more than one color wheel, it depended on which color circle you decided to go with.

The Red Yellow Blue (RYB) primary color circle was most often used during my schooling. This was because those were the pigments we most often used, and in this case yellow did complement the mixture of red and blue, which was called purple. If you mixed all three you tended to get a dark color that, depending on your ratios, was a pretty decent neutral, which is really important in color mixing. Hardly anything in the world around us is a fully saturated color. 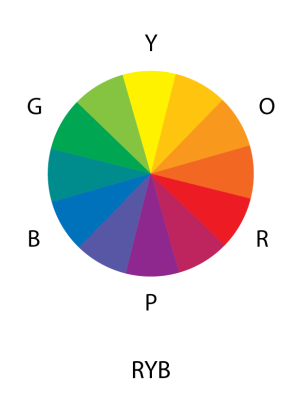 However, with light it is very clear, and also demonstrable in your own home with flashlights and colored films, that blue is the complement of yellow. And when they mix they create a fairly neutral white. As color is essentially about light (and pigments are a complicated world in themselves) I decided to go with the Red Green Blue (RGB) color circle. As an added bonus, those clever artists and color scientists figured out that certain other pigments can work quite nicely in this structure. Cyan, Yellow, and Magenta are the colors that Red, Green, and Blue light make when mixed, while Red, Green, and Blue are made with Cyan, Yellow, and Magenta pigments. Learning that was incredibly satisfying. 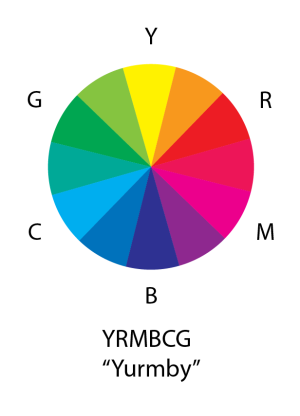 But since Cyan, Magenta, and Yellow pigments don’t actually create Black, Black is needed for the very darkest colors.  So this system is called the “CMYK” system, where “K” is used for Black so it’s not confused with Blue.

There’s a neat way these two systems can be combined, called the “Yurmby” wheel, which I used to create Disciplines of Geography.  That’s where we’ll start next week!