After a 24-hour journey yesterday, I finally returned home from my month-long trip to Europe.  Not that Vienna and Florence weren’t fantastic, but I must admit that Bridges 2016 was the highlight of my trip!  I’d like to share some especially memorable moments of the conference this week.

Of course the most memorable is the annual Art Exhibition. 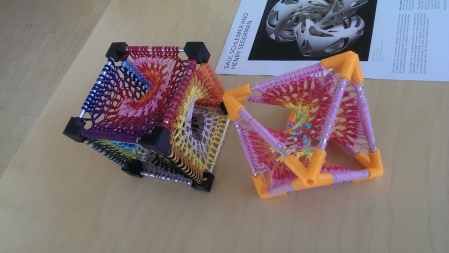 I’ll discuss some of the pieces in this post, but there is no way to include them all!  Luckily, there are online galleries for all the Bridges conferences.  You can access them at the  Bridges online art galleries, although the gallery for Bridges 2016 is not up yet (but will be soon).

Two of the most memorable displays in the exhibit (no bias here, of course!) are my two pieces, 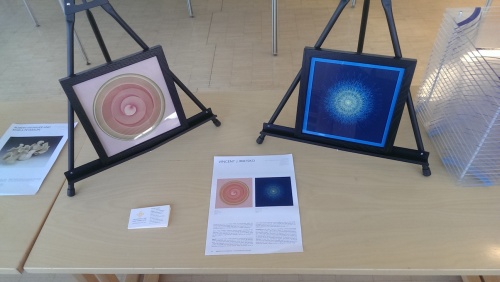 and my student Nick Mendler’s two pieces (the second piece is shown later). 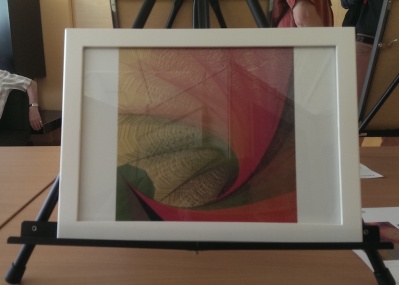 It’s a real pleasure just to walk among the artwork and admire the intricacy of the pieces close-up.  Pictures absolutely do not do justice to the experience….  Some pieces which particularly stood out for me were these spheres created by Kiyoko Urata. 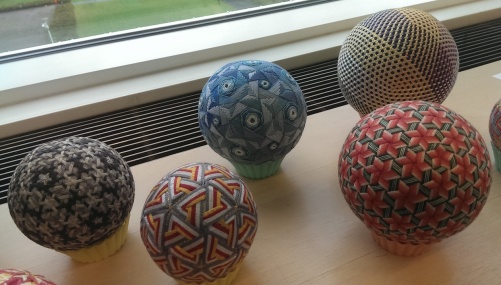 Look closely at how they are made.  The medium is silk thread.  Yes, these are knitted!  These models won the award for Best Craftmanship, and they definitely deserved it.

Many of the talks in the Bridges conferences were about works in the exhibition, but not all.  I was particularly fascinated by a talk given by James Mai of Illinois State University (click here to read the full paper).  He discussed Josef Albers’ series Homage to the Square; one piece in the series is shown below (image courtesy of Wikipedia).  I have written about Josef Albers before (see Day002), so you might imagine I was rather interested in seeing this talk. 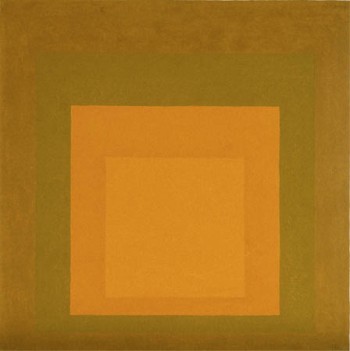 I’d seen these images before, but I just thought they were color studies.  The point of the talk was to suggest that there are many possible ways to interpret these figures.  For example, a naive interpretation is just to look at this image as four squares, one on top of each other.  What fascinated me was how many other ways there are to look at this series by Albers.

For example, what if some of the square are transparent?  Then some of the colors you see are the result of other colors showing through some of the squares.  But which ones?  What combinations of transparency are possible?  If we take it a step further, we might imagine that there aren’t four squares, but perhaps some frames — that is, squares with smaller squares cut out.  Further still, one or more of these frames might also be transparent.

In total, Albers produced over 1000 images of four different configurations of squares in this series (see the paper for details).  In the talk, James Mai found that there are in fact 171 different combinations of frames/transparency that are possible!  This is an entirely different level of complexity that I never imagined possible in this Albers series.  I intend to discuss this phenomenon in my Mathematics and Digital Art course this fall, so be sure to follow along if you’re interested to see more.

Nick and I did talk about our own work.  I was happy with my talk, which prompted a lot of questions from the audience — always a good sign!  Nick really did well for a first time at a conference like this.  He had 15 minutes allotted for his talk, and if you’ve never given a short talk, you may not realize how difficult it is.  As Nick and I sat through sessions, I kept noting to him how rushed many of the presenters were at the end because they spent too long at the beginning getting into their talk. 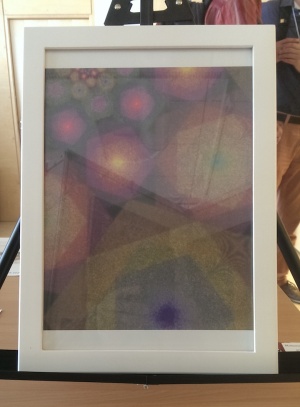 But Nick had no time issues at all.  We worked at getting rid of a few slides which took too much time to explain — Nick talked through the remaining slides at a leisurely pace, and even had a few minutes for questions at the end.  Really well done.

One special treat was a talk on spherical mirrors given by Henry Segerman.  It really can’t be described in words, but if you look at his YouTube channel, you’ll find some truly amazing videos.  I highly recommend it!

There were also many scheduled events outside the university.  Again, there is no way to describe them all, but my favorite was the exhibition by Rinus Roelefs (who was attending the conference) at the Art Gallery of Central Finland’s Natural History Museum.  This was a spectacular display of polyhedra with a special opening night during the conference. 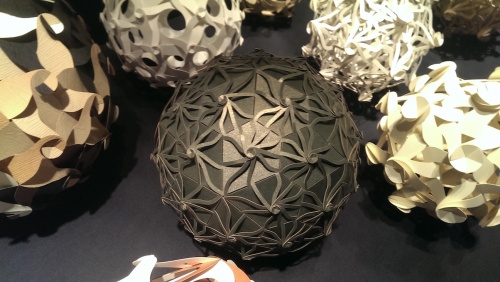 There must have been at least 200 models exhibited, all very intricate and exquisitely assembled.  See my Twitter @cre8math for more pictures of this one-of-a-kind display.

Expect the unexpected — if you’ve been following me on Twitter, you’ll recall I posted about “found art” just walking around the streets of Florence.  There was a really wonderful surprise along the pedestrian walkway through central Jyvaskyla. 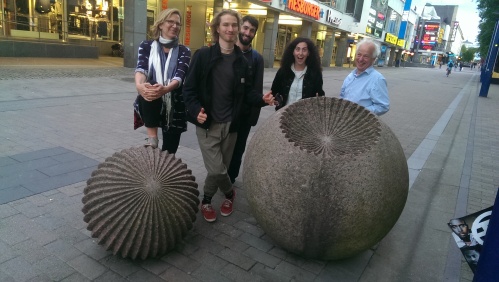 Not much explanation is needed here — but it was just so neat to find this piece in the middle of the street!

Hopefully this gives you a sense of the atmosphere of the conference.  Truly magical!  If you are really interested, Bridges 2017 is in Waterloo, Canada, so it’s a lot easier to get to than Jyvaskyla, Finland.  Nick and I are already determined to attend, and will be starting our planning later this Fall.  I’m planning to give a report on my Mathematics and Digital Art course I’m teaching this semester, and Nick is hoping to take his investigations into the third dimension and make some awesome movies.  You’re welcome to join us in Waterloo for Bridges 2017!