It’s hard to believe, but I published my first blog post one year ago today on September 1, 2015.  It’s been a challenge at times to keep up the weekly posts — but I’m very glad I did.  So here I write, fifty-five posts later….

I do wish to thank my followers and email subscribers, but I’ll stop there at sentimentality.  Given the occasion, I thought I’d talk about one important aspect of the art of mathematics that I’ve hinted at now and then.  Mathematics is a team effort.

Sure, sometimes I have to sit at my desk and just do mathematics.  But there’s a lot more to mathematical endeavor than that.  So I’d like to discuss some conversations I’ve had over the past year — conversations which helped me formulate new ideas and forge new directions to pursue.  Places I wouldn’t have gone if all I did was sit at my desk….

Some of my earlier posts were a direct result of doing some independent study work with one of my students, Thomas. 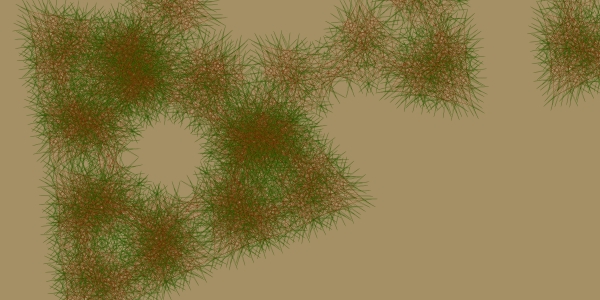 We were talking about the usual recursive algorithm to create the Koch snowflake, and he asked what would happen if we changed the angles used in the algorithm.  This prompted a year-long investigation into properties of images created using the algorithm — especially images with rotational symmetry.

I gave talks about this phenomenon in Vienna and Finland.  I also mentioned discussing this with one of the conference attendees in Vienna — Paul — who said the images in my talk reminded him of some work he had done earlier.  This image is generated using Paul’s algorithm.

When I looked at his paper, I found that he had used a different recursive algorithm — but surprisingly, the images had a similar feel to those I created.  I haven’t had time to explore this alternate algorithm yet, but if I hadn’t been talking to another artist and mathematician, I might never have come across it.

My last two posts were the direct result of attending a talk at the Bridges conference in Finland.  I had posted about Josef Albers before, but James gave a talk which looked at Albers’ Homage to the Square series in an entirely different way.

The ideas in this talk got me thinking about color on a computer screen and the use of opacity — how there are many different ways to color objects using various combinations of color values and opacity such that visually, they appear the same on a computer screen.

By looking at how opacity is implemented in a typical graphics program, this phenomenon may be analyzed mathematically.  I’ve just scratched the surface in the last two posts; there’s definitely more to be done here.

Working with Nick to get prepared for the Bridges conference was also valuable.  He created fractal images using a particular recursive algorithm he developed.

Most recently, Nick generated a series of fractal images based on a certain parameter.  When this parameter is below some threshold value, the image looks like fractal dust.  Above this threshold value, and the image overlaps itself.  But there seems to be a particular value where parts of the fractal just touch.

Sometimes finding such threshold values can be very difficult.  But I have a hunch we might be able to calculate it for some of the simpler fractals, and I look forward to the challenge.

There were many, many other conversations about mathematics and art over the past year — but these jump out to me as significant.

Any mathematician reading will naturally say, “Of course!”  This is the way that most mathematicians I know work on a daily basis.  It is often useful to share work with others and bounce your ideas off them, just like in most other disciplines.

I think it less likely that a non-mathetician would see the social aspect of doing mathematics.  So I thought I’d talk about that today.

A final “Thank you!” to my loyal followers.  I’ll keep talking, traveling, creating art, and introducing you to others who have inspired me along the way.  Time to begin Year Two!

One thought on “Celebrating One Year!”