Last week, I attended the Symmetry Festival 2016  in Vienna!  I’d like to share some highlights of the week.

The first was a sculpture based on a hypercube net.  One of the most famous illustrations of this geometrical object is Dali’s Crucifixion.

Without going into too many details, eight cubes may be folded into a four-dimensional cube — called a hypercube or tesseract — just as a net of six squares may be folded into a cube.  Because folding a flat net of six squares requires folding into the third dimension, folding a hypercube net requires a fourth spatial dimension.

Silas Drewchin created the following sculpture based on the hypercube net. 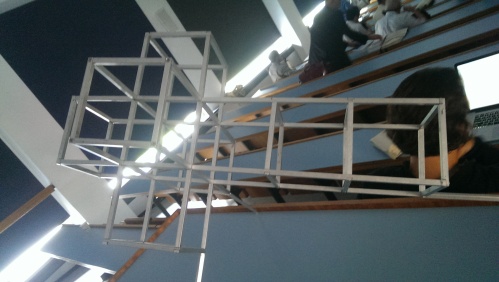 You’ll notice a few differences:  there is an extra cube added, for a total of nine cubes.  And there are three additional struts added to support the net being tilted at an angle.  Here is what he says about those design elements:

The Hypercross is a metaphor of acceptance….By giving the Hypercross an extra base cube, the mathematical purity of the net tesseract is shattered because a true tesseract only has two base cubes. To disfigure the purity of Christian symbolism embedded in the tesseract, it is tilted to an acute angle as if it is tumbling to the ground. Without this tilted adaptation the sculpture would look dogmatic. The hybrid distortions of the mathematical form and religious form actually add to the message of acceptance.

An additional feature of this work relates to the shadows it casts.  The photo speaks for itself.

A fascinating piece!  I’m a big fan of the fourth dimension, and always appreciate when it arises in mathematical and artistic contexts.

The second highlight for me was meeting someone who is interested in creating the same type of digital images I do.  I had met Paul Gailiunas before at previous conferences, but never knew of his interest.  Here is an adaptation of one of his images — you’ll notice a similarity to those I recently posted on Twitter (@cre8math, 2016 July).

What was facscinating to me was how he created images like these.  I first discussed these images on Day007, where I used the same recursive algorithm typically used to create a Koch snowflake:

For example, choosing n = 3 gives the two segments produced by

But to obtain R(4), we need to use recursion:

This recursive process may be repeated indefinitely.

This algorithm, like the one used to generate the Koch curve, sometimes closes up and exhibits rotational symmetry.  One challenge in this case is that the center of symmetry is not the origin of the coordinate system!  A rigorous mathematical proof of which choices of angles a and b generate a closed, symmetric curve is still forthcoming….

A third highlight was the Family Day activities in front of the Karlskirche in the Karlsplatz.  At conferences like these (such as the upcoming Bridges conference in Finland), there is a day where mathematics and art activities take place in a public venue, and anyone walking by can sit down and participate.

I sat down at the table demonstrating the Poly-Universe, a system of geometrical forms created by Janos Saxon-Szasz.  They were fun to play with, and rather challenging as well!

I was happy to have solved the puzzle illustrated here — put together all 24 tiles to make a system of hexagons so that the colors and shapes all match.  There are many solutions, but none are easy to find.

What makes these forms interesting is that each tile includes four colors and parts of four differently sized circles.  Moreover, they occur in all possible combinations — and since there are 4 sizes of circles, there are 4! = 24 possible configurations.

There are also forms made from triangles and squares, which pose a different challenge.  I moved to help a young girl and her mother try to put together a 6 x 4 rectangle from the 24 square pieces, but was not so successful there.  At some point you have to move on to see the other exhibits….

A final highlight was the Natural History museum in central Vienna.  They had an extensive array of minerals and gems — the largest collection I’ve ever seen.  The colors and textures were diverse and beautiful, and of course when looking at crystal structures, there’s a lot of geometry.

Because the rhombic dodecahedron is space-filling, it tends to occur as the basis for crystal structures, as shown here.

It is always remarkable to me how nature is constrained by geometry — or maybe geometry is derived from nature?  Regardless of how you look at it, the interaction of geometry and nature is fascinating.

The week went by pretty quickly, as they usually do when attending conferences like these. Stay tuned for further updates on my European adventure!  (I’m also tweeting daily at @cre8math.)