It’s hard to believe it’s been a month since my last update!  This semester has been unusually busy.

At the end of my last update, I said I’d talk more about using L-systems in class.  I decided to focus on the symmetrical Koch-like images I had been working on for the past few years.  There are two reasons for this.  First, it’s fresh — and demonstrates that creating new fractal images is an active research topic; not everything is known.  Second, you need to know some elementary number theory in order to create symmetrical images.  Since none of the mathematics we studied so far was closely related to number theory, this was a great opportunity to see yet another application of a different branch of mathematics. 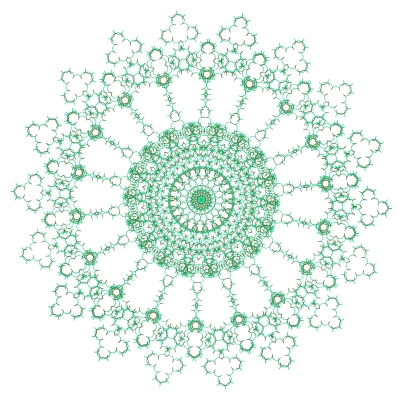 Then finally, I showed students how to find angle pairs which created symmetrical images using a theorem in a paper I’m working on for the College Mathematics Journal.  As the proof involves significantly more mathematics at a level beyond what we could reasonably discuss in the course, I just showed them the result.  I won’t go into details here, but I’d be glad to share a draft of the paper if you’re interested and adventurous….

For their project work, they had to create images using the results of the theorem in Processing.  Karla created this image, which I find interesting since it exhibits six-fold symmetry, but the exterior elements have seven points on them.  So rarely do you encounter 6 and 7 together in geometry.

Peyton created this image, which is suggestive of a complete image, but which doesn’t include all the line segments.  But the overall symmetry of the image is clear; you can complete it in your mind’s eye.

I also asked students to create an image which did not close up, to experiment with parameters which generated a more chaotic image.  Colette created this image, which reminded her of the top of a pine tree.

Some students did have difficulty using the theorem correctly to generate images with symmetry, so next semester I’ll spend a little extra time making sure everyone’s on track.

We also had another guest speaker visit the class since the last update.  I met Gwen Fisher at the Art Exhibition in Santa Clara at the Regional MAA meeting last month, and thought she would be a great fit for our class.  What I liked about her art is that she works with beads in very mathematical ways — and her work is very different from anything we had been doing in the class.

She brought in several of examples of her beadwork to pass around.  You can see many beautiful pieces on her website, including this Wisdom Mandala piece she designed.

What was wonderful about her presentation was that Gwen discussed both the design and the execution of her pieces.  My students were very engaged, and asked lots of questions along the way.

It turns out, though, that I had seen a talk she gave two or three years ago at another conference!  Of course you can’t remember every speaker you see at every conference you attend, especially out of context.  But after seeing her talk, I realized some of the slides looked strangely familiar, and that is because I had actually seen them before….

One more bit of news.  You might remember that Mathematics and Digital Art has been offered as a First-Year Seminar course this year, meaning that only first-year students may enroll, and the maximum number of students in the course is set at 16.

Being a faculty member at the University of San Francisco, I am also working on a project with colleagues in creating a Mathematics for Educators minor — a series of courses aimed at prospective middle-school teachers to broaden their knowledge of mathematics especially suited to middle-school students.  And of course a digital art course would fit nicely into this framework.

But what if a student decides to opt for the minor after their first year?  Well, they couldn’t take digital art.  So now, the course is a regular offering in the Mathematics and Statistics Department, open to any student at USF.  I’m very excited about this, and really hope to spread the word about the Imagifractalous world of mathematics and digital art!

I’ll keep you updated in the Fall, as I have more changes in store for the course.  I plan to move completely to Processing, since now everything I used Sage for has been rewritten for Processing.  And next semester, I’ll include a short unit on binary trees as well.  Stay tuned….

One thought on “Mathematics and Digital Art: Update 3”