Of course, there is always more to say about hyperbolic trigonometry….  Next, we’ll look at what is usually called the logistic curve, which is the solution to the differential equation

The logistic curve comes up in the usual chapter on differential equations, and is an example of population growth.  Without going into too many details (since the emphasis is on hyperbolic trigonometry),

is a constant which influences how fast the population grows, and

is called the carrying capacity of the environment.

and so the population growth is almost exponential.  But when

gets very close to

and so population growth slows down.  And of course when

Here is an example of such a curve where 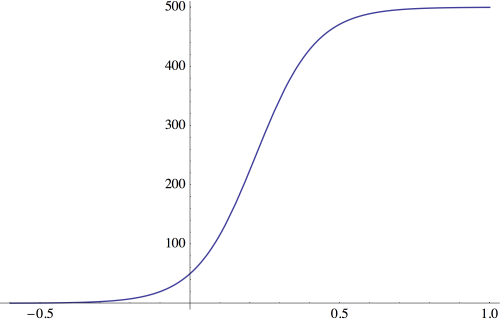 Skipping the details (simple separation of variables), the solution to this differential equation is given by

I will digress for a moment, however, to mention partial fractions (as I step on my calculus soapbox).  I have mentioned elsewhere that incomprehensible chapter in calculus textbooks:  Techniques of Integration.  Pedagogically a disaster for so many reasons.

The first time I address partial fractions is when summing telescoping series, such as

It really is necessary.  But I only go so far as to be able to sum such series.  (Note:  I do series as the middle third of Calculus II, rather than the end.  A colleague suggested that students are more tired near the end of the course, which is better for a more technique-oriented discussion of the solution to differential equations, which typically comes before series.)

OK, time to step off the soapbox and talk about hyperbolic trigonometry….  The punch line is that the logistic curve is actually a scaled and shifted hyperbolic tangent curve!  Of course it looks like a hyperbolic tangent, but let’s take a moment to see why.

We first use the definitions of

You can see the form of the equation of the logistic curve starting to take shape.  Since the hyperbolic tangent has horizontal tangents at

we need to scale by a factor of

so that the asymptotes of the logistic curve are

Note that this puts the horizontal asymptotes of the function at

We can accomplish this be replacing

We’re almost done at this point:  we simply need

Solving and substituting back results in

is an odd function, becomes

And there it is!  The logistic curve as a scaled, shifted hyperbolic tangent.

Now what does showing this accomplish?  I can’t give you a definite answer from the point of view of the students.  But for me, it is a way to tie two seemingly unrelated concepts — hyperbolic trigonometry and solution of differential equations by separation of variables — together in a way that is not entirely contrived (as so many calculus textbook problems are).

I would love to perform the following experiment:  work out the solution to the differential equation together as a guided discussion, and then prompt students to suggest functions this curve “looks like.”  Of course the

might be suggested, but how would we relate this to the exponential function?

And as is typical in such an approach, I would put students into groups, and go around the classroom and nudge them along.  See what happens.

There is no room to adequately address that important question here, but in today’s context, I would say this:  I think it is more important for a student to be able to rewrite

Why?  Because it is trivial to graph functions, now.  Type the formula into Desmos.  But how to interpret the graph?  Rewrite it?  Analyze it?  Draw conclusions from it?  We need to focus on what is no longer necessary, and what is now indispensable.  To my knowledge, no one has successfully done this.

I think it is about time for that to change….