It’s hard to believe yet another academic year is over!  I do think this second semester of Mathematics and Digital Art went a little more smoothly than the first.  This shouldn’t be too surprising, though — the first time implementing any new course is a little bumpy.  Though I must admit, there were surprisingly few bumps the first time around….

Like last semester, I had students create a movie in Processing.  The main tool I had them use was linear interpolation to create animation effects.  As before, I encouraged them to use linear interpolation with any numerical parameter in their movie — how much red there is in the background color, the position of objects on the screen, or the width of points and lines, just to name a few possibilities.

Colette created some interesting visual effects.  Some students (like her) took advantage of the fact that if you don’t set the background color in the draw function in Processing, successive calls to the draw function overlap the previous ones, giving a sense of movement.

Peyton was inspired when her friends invited her to go to the beach.  Here is a screen shot of her movie, where the moon reflects off the rippling waves of the sea at Ocean Beach in San Francisco.

Next, I’d like to share a few pieces from students’ Final Projects.  Recall that Final Projects are an important part of the course — during the second half of the semester, we spend one or two days a week working on them.  This is the opportunity for students to explore any aspect of the course in more detail.

While Lainey focused on making images which reminded her of her dreams, she began with this collage including  several motifs from our coursework throughout the semester.  She was one of the few to incorporate L-systems into her Final Project. 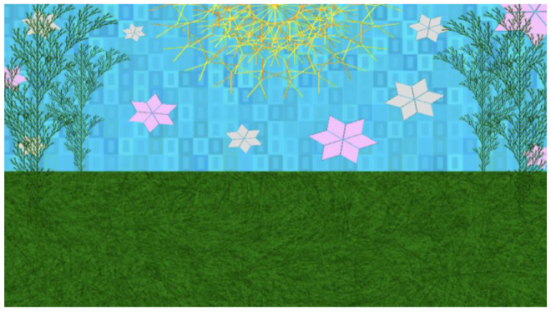 Karina, as many students did, experimented with image processing.  She wanted to overlay multiple images at various transparencies to create a kaleidoscopic effect.  Rotating the images required that she brush up on her trigonometry….

Also like last semester, I asked students to write a final response paper about their experience with the digital course.  The responses were similar to those of last semester, so I’ll only include a few excerpts here.

I think differently about mathematics in how it relates to art. I always thought that the two would be separate entities, but this class has proved that’s not always the case.

After having taken this course this semester I really have gained an interest in art and programming that I certainly didn’t have before, even after having taken some courses in programming. I think that actually being able to see the endless things that are able to be created using programming and math is really cool….

One student made a particularly interesting remark:

I wish that I had more knowledge on how to type my own code. There were points in the semester where the art I was creating felt a bit like a coloring page where we were given a page that was already drawn and told to fill it in and try to make it our own.

Of course this is what I want to read!  I do want to inspire students to investigate programming further — but students taking this course receive a mathematics credit.  There is certainly no doubt in your mind about how passionate I am about having students learn to write code, but I do need to emphasize the mathematics of digital art.  Maybe next semester I’ll have Nick run some extra sessions on coding for those who are interested in learning more.

I also wanted to share some work from the other course I taught this semester, Linear Algebra and Probability.  I have students work with affine transformations and iterated function systems in this course as well.  Their first project is a still image using Sage, and their second project is a fractal animation using Processing.  Here is Jay’s submission.

And finally, I want to remind you that Mathematics and Digital Art is becoming a university-wide course next year.  I am working with the Fine Arts department here at USF to encourage incoming fine arts majors to earn their mathematics credit by creating digital art!  I expect the course to be quite a bit larger this Fall, and will be connecting with the Fine Arts faculty to make sure the content meets their needs as well.

In addition, I will be giving a talk at Bridges this summer (in Waterloo, (the Canadian one, that is)) about my digital art course.  I’m expecting that I’ll receive a wide range of comments and suggestions, so the course may be a little different in the fall.  That’s one nice feature of this course — it’s not a prerequisite for any other course, so there is some flexibility as far as content is concerned.

Like this semester, I’ll provide monthly updates to let you know what changes I’ve implemented, and also to showcase student work.  So stay tuned!